Flow and melt through sweat;
should there be light, I bet,
it wouldn’t come as other than threat.

We resume the regular casting of things other than snow and shovels for a glimpse of the greater project you heard in some past updates, but as the skiing season is not over yet you’ll have to carry on for some other weeks of seldom snow-y days and whitened shapes.

After the threatful experience of the waived Arbola’s summit I had to catch some sunlight without having to fear gettin lost in the mist or having to build an emergency shelter (although it was very fun to do). So on a sunny sunday morning I hooked up with a couple of friends and pointed to my beloved Northern Grigna. Unfortunately the party was not made of early birds, so we met around 8.30 am and started the journey only around 9.30.

As the sun was warming the ground the snow started to melt (science!) and coalesced in heavier lumps-like structures that made the ascent way heavier than expected. Not a single breath of wind was blowing on us, and as we stepped on higher grounds every layer of clothing became even heavier, so we ended up skiing up with just our bare shirts on (we kept the trousers, tho). 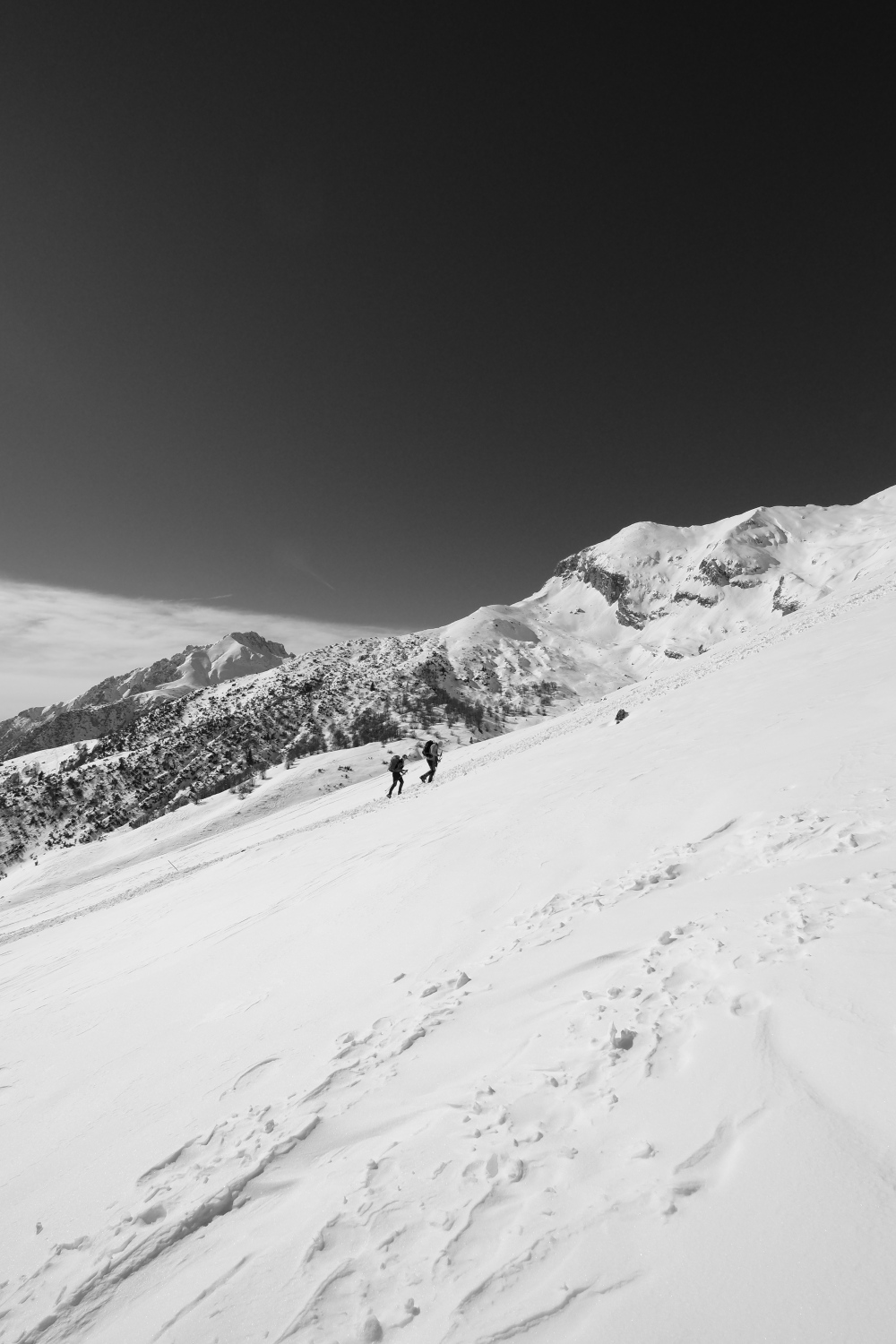 The track goes from the Red church of Balisio up to the Brioschi hut, crossing some other huts (Pialeral, Comolli), but don’t be eager to know these already, I hope to cover them more deeply in some future adventure.

As the verticality rises, nature tends to adapt bending and twisting.

We tried to copy the approach but ended up sweating just like before.

Not far from Comolli hut the “wall of tears” opens up with heavy slopes pointing to the last higher ridge. It was around 1:30 pm when we reached the hut, even if it was already late to complete the ascent the thrill of the wall of tears was calling us.

A quick snack, some shots of hot tea and we started rising again among these whitened hills. Close to half of the wall we finally surrended to the melting snow and opted for the more conservative choice of turning our backs to the summit to ski back home. Around us we could see some shiny fields meaning that snow was quickly turning into water, in these conditions below the surface some flows of water may happen, thus leading to some unstable layers of snow that may detach and start an avalanche.

To keep our skins on, we had to turn back and start skiing without cutting the blanket too much.

On our last meters of plowing I hit a hell-of-a-boulder with a ski, punching a dime-sized hole in the lower sole. Only a shot of warm wine could easen the fatigue and broken heart.

Among the glimpse of sun some red-robin decided to knock at the door. While doing a damage assessment on the pierced ski this guy showed up, too early for spring and too late for dinner.

Why all this intrest for a regular feathered fellow in a not so great picture? He was the first to pop-up since a long time.

On monday I took a day off, and went on with the long-known model for the third stage of the bigger trail we are doing over these months.

This time the trail was lighter and crossed some towns in which we discovered some hidden gems like medieval relics, small churches (we rang the bells), spectacular sights and much more.

For now try to get enough of this with just few shots, as more will come when we’ll end the trail.

This last picture is taken inside a church on the trail.

Accelerated by a frenzied world, the outline of our movements merges with the road, what surrounds us is overshadowed by the final goal that distorts as well like its contourings.
What is kept from the journey if even the goal seems to change as we walk the road that leads to it?