The interrupted dream had to be retaken in a short, and we couldn’t let it pass without feeling the wild call again.
So we finally did it.

Today the office backpack is much heavier than usual, breakfast felt like a wedding lunch and throughout the day I can not sit still.
On the clock a still minute hand runs slower than ever, usual mails rain like in a summer storm and the heat knocks with arrogance on the windows, divided between a livable office and a tropical exterior. Whenever I look at the clock, time seems to be going back rather than moving forward, obviously panta rei does not work at 5 pm on Friday.
When the bell finally rings, at the first stroke I am immediately projected towards the summer heat.

I dodge (just in time) the afternoon jams finding myself darting on the road 36 in the direction of Pian dei Resinelli. Today there is no bus to slow the hairpin bends and in the blink of an eye I’m at the Porta hut. While siping the imminent adventure waiting for Stefano and Michele, coming as well along the 36th, from the hut emerges a large group of pensioneros about to face a tour of several days on the coasts of Grigne.

Finished to socialize with the olds my two companions finally arrive, backpack loaded and front torch already fitted, we start along the Cermenati ridge and in no time the sun is already setting behind Monte Rosa. The rocks are still warm from the sun of the day and the darkness finally give us breaths of fresh oxygen. Together with us  some young chamois are coming back to life after the daily heatwave, they approach us like as driven by curiosity while grazing grass and moss from the couloirs surrounding the path.

The moon today is non-existent and only the light points of our front torches are able to light our steps as we look around in an environment transformed from green mountain to a  dark cathedral of limestone spiers, silhouetting in the night as a trail on our path. By brandishing with the torch we see some light points hidden in the shrubs, we revealed the nocturnal hiding places of some chamois, hiding in the bushes to look for protection and comfortable breakfasts at the time of awakening.

We reach the top after pulling some chains and nails using special caution for each step, as with poor visibility it is easy to confuse a support with a voidpoint, and finally we arrive at the bivouac. We see a scene reminiscenting us of the seaside resorts of our italian coasts: 3 tents, a group of guys doing a barbecue and another couple of people spending the night with us on the summit. The bivouac is already full and we can only lie down on the ground, having as its only cover the heavenly vault that turns out majestic and eternal above us.

The night flows between pungent moments of cool and wet nocturnal awakenings due to the humidity rising from the grass. We wake up at 4.30 wet and cold, but we know that in a few minutes the first rays of the sun will heat us enough to make us forget the cold we are going through in these moments.

After a quick breakfast with biscuits and chocolat we start going down the equipped sections leading from the top of the southern Grigna to the Federazione couloir. 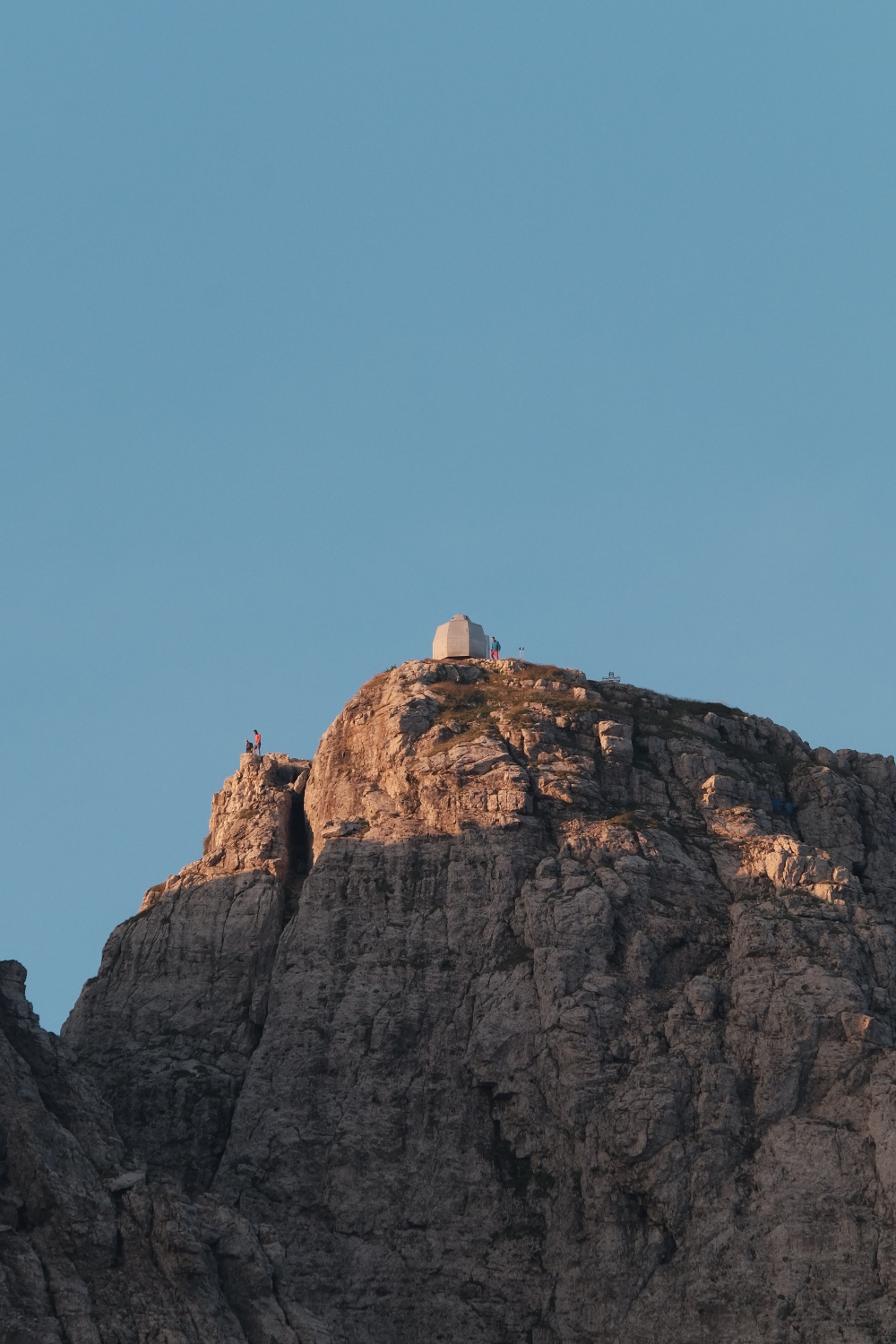 The landscape is lunar, but at the end of this first descent we await a verdant valley densely populated by the first locals. The scene leaves us speechless: 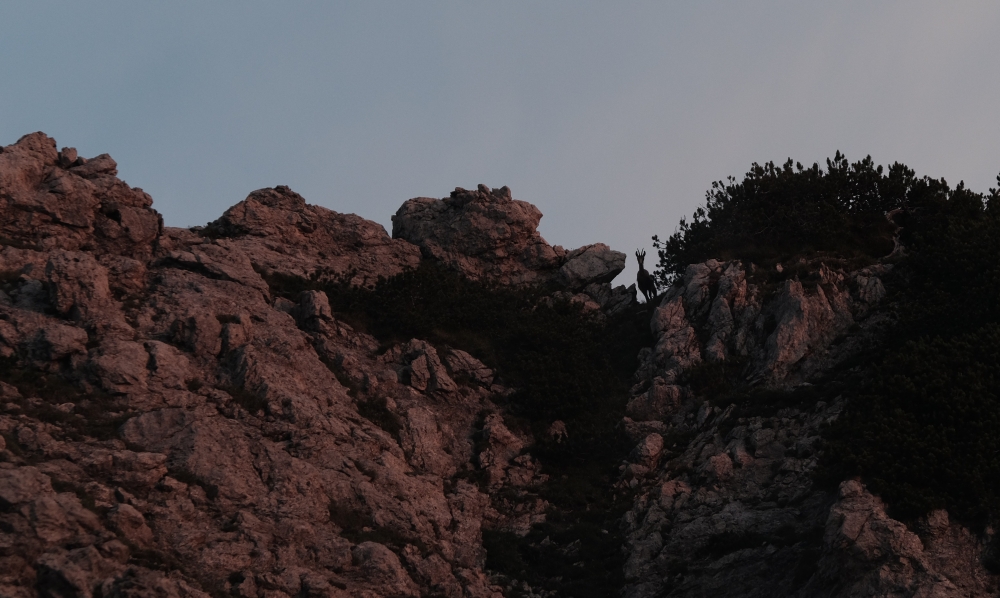 Groups of young chamois are waking up like us in the rays of dawn, consuming their grassy breakfast keeping an eye on us from afar, intrigued and frightened by our presence, strangers in this vertical world. 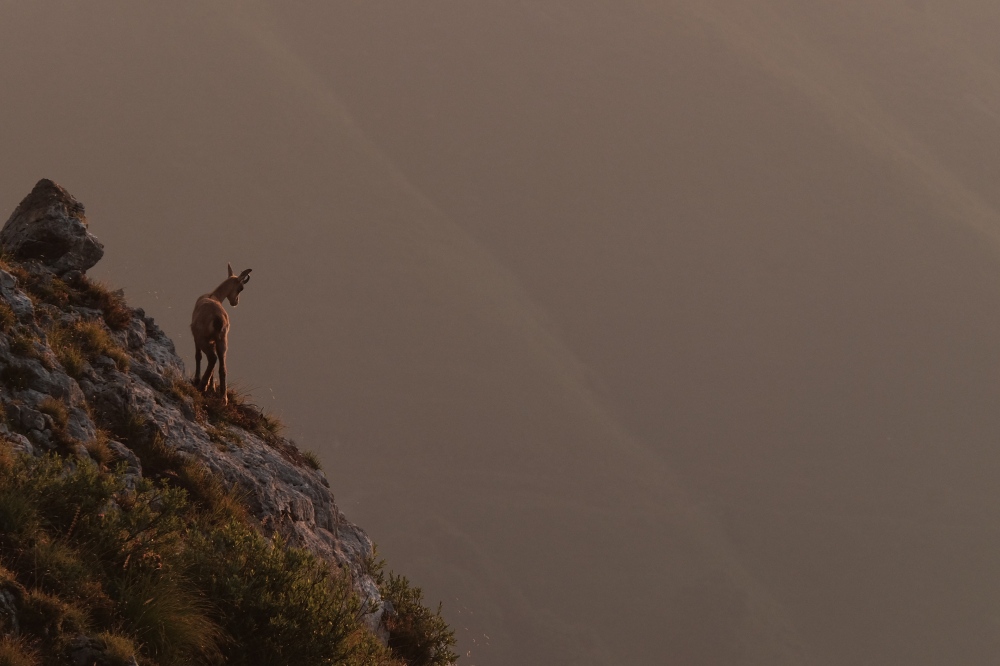 Individuals gather in groups, and the groups in packs run along the borders of our sight, alternating between the slopes of the ridge in search of breakfasts less disturbed by the human presence. 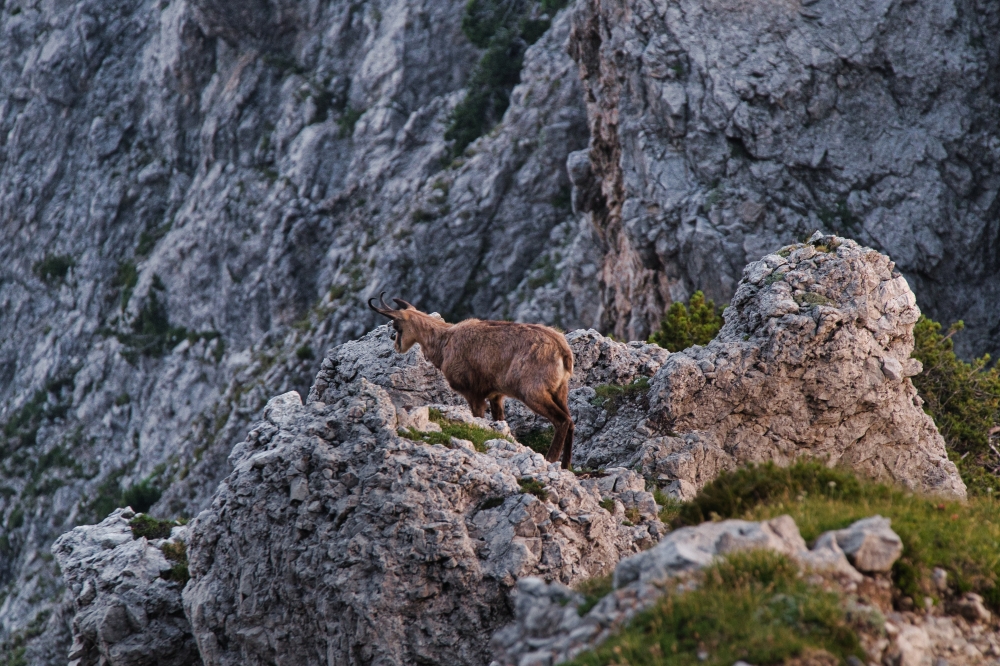 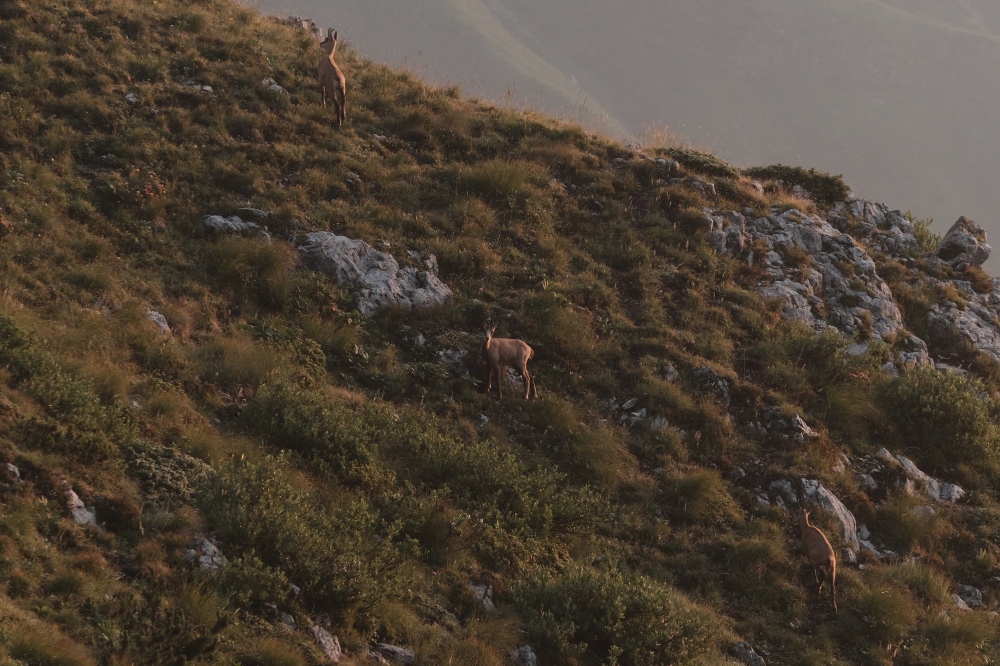 We reach the famous Tremare Shields, which we overcome by pulling chains and invectives, the morning dew makes everything more slippery and difficult, but we do not let ourselves be discouraged and continue swetting and pulling rocks.

So we arrive at the last saddle before Brioschi hut, here a bivouac abandoned and devastated by ignorance recalls the times when the mountain was still wild and untamed. today many underestimate the history of these peaks paying dearly for the pride of superficial hiking.

A last tear of effort leads us to the Brioschi refuge, and it is immediately breakfast and joy.
Cake, tea, water “a garganella” and we are already on the move towards the descent.

Trailing down the “summer route”, descending towards the Pialeral refuge along the Parolo valley, we come along mountain pastures, streams and fainting hikers.

Reached the Pialeral I realize the time is late, and due to an appointment in the afternoon I have to run (literally) to the Pian dei Resinelli to get home in a hurry.  I dry all the energy left and cut the time reported on the trail to such an extent that I can also give a small relief to the Forno della Grigna, injecting salts and water into vein, capping everything with a fantastic pizza to slice.

Thus ends an adventure so long dreamed, certainly to be repeated and better documented as the rash of chamois has attracted all the attention of the day. Closed this project it was time to change a little ‘landscape, also changing rocks and region. That’s why in the next updates you will read about the latest new adventures… Dolomites!
Stay tuned.